Over a hundred perhaps, two hundred or so, men, women, and children seeking asylum camp out on the Mexican side of the US/Mexican border, their cramped clusters of round multi-colored tents hugging the right side of the border. Most of them are from one of the Northern Triangle Central American countries, Honduras, El Salvador, and Guatemala, and all are asking the United States to hear their asylum claims even though they are technically supposed to ask Mexican officials for the same request – first.

My report is based on a brief, two-day visit, as a volunteer advocate and intent on providing assistance to the migrants, mostly in the form of information as they navigate the legal and social trajectories of asylum seeking. Upon my entry into the unrestricted camp area, my list of mental questions quickly expanded in scope and complexity. As I perused the literature posted around the building of the Mexican immigration office, the Instituto Nacional de Migración (INM), I realized that most information involving process and procedures was disseminated by word of mouth. I turned toward a young woman, a survey taker with clipboard in hand and wearing a name tag. As I approached her I noticed another young woman, a mother with two young children standing nearby. The survey taker wanted to know if I was a “visitor” and what was I doing in Matamoros. The young mother wanted to know where she could claim asylum since she had just arrived from Honduras. The survey taker replied that she didn’t know and I responded that neither did I but that I would help her get the information. Thus, began my friendship with Marisa and her two children: José, age seven, and Miguel, age two.*  Eventually, I learned that Marisa’s decision to leave her home was sudden and swift although she had thought about it for a very long time. She told of her violent relationship with her partner and that he was also hurting the children. It became clear that her decision to leave was largely hinged on the violence that he committed against her children, that he had crossed the line and she would have to move in with her cousin in New Jersey where for sure he wouldn’t be able to hurt her and her children. She felt he would eventually kill her or her children if he found them. Her story is not atypical of the cases of each migrant in the asylum seeking camp. Generally speaking, the migrants are here because they feel that they have no other option; each one led to a dead end, and their only escape was to leave their country. Additionally, if they returned to their country they would be subject to the same violence and lack of protection from state authorities that they had experienced before leaving, except that having attempted to leave places them in further danger of retaliation from which they would not be able to evade. (For additional information, please see articles in this blog)

Recognizing the need to register her application for asylum, Marisa looked for the offices of the INM. The only person available, a custodian in a classroom style room, informed Marisa that she had to find the “right” person so she could submit her identification papers and formally request her claim. Marisa asked one official-looking man the question and he in turn asked what she wanted to do. She responded, in Spanish, of course, that she wanted “assistance, asylum.” No response. After asking about five other people that “looked” official with white shirts/blouses and light khaki pants, one of them, a female staff member, accepted her papers and without another word took them to her upstairs office. I waited with Marisa and her children virtually all day long, watching the stairwell carefully, for the woman to return her papers. At around 4 P.M., Marisa notices a man coming down the stairs with her papers, which she recognized because of the pink plastic cover. She approaches him, he hands her the papers and tells her simply to be here (pointing at the porch areas of the building), tomorrow at 8 A.M.

The next morning, one of the male staff members tells Marisa that he would walk with her to the United States (across the bridge) to begin her application for asylum process. She was escorted by three male staff members, two were with INM and another one whose role was unclear although he wore a dark green uniform. I didn’t hear from Marisa again until the following evening.

When I returned to the INM camp site the next morning I was approached by one of the staff members who told me that “my friend” would return later in the day. She and her children had spent the night at the Border Patrol Headquarters. She would join the others at the camp and wait to attend her mandated court appearance, most likely scheduled for early next year. I drove back to my home in Central Texas and Marisa sent me a text message later that evening, indicating that she and the children were safe.

Upon her return to the camp, Marisa and her children will have to find a corner somewhere in the chaotic tent settlement to basically camp out with the barest of necessities until they can procure donated items, such as a change of clothing, diapers, blankets, and a tent. The INM staff member had told me that she will have to keep an eye out for the donation vehicles since he doesn’t know when they come around.

During my time at the camp I was able to converse with a few migrants about their experiences, and accumulated their information with my observations. The living conditions at the camp are extremely dire, for everyone, but especially for the most vulnerable such as the young children and those with certain illnesses such as diabetes. Some of these problems have already been documented by others, some of which have persisted for years without any effort by the authorities to ameliorate the mental and physical effects on the migrants. But, this outdoor camp in the Matamoros-Brownsville border has specific challenges unlike other detention centers.

The migrants seem to live in a state of eternal purgatory; they seem to want to stay positive and hopeful. But one of the migrants, a man in his thirties, told me he was ready to go back to El Salvador with his fifteen year-old son.

* The names of Marisa and her children are not their real names.

Images of the Matamoros INM migrant camp. The top image, on the other side of the cyclone fence, is the bank of the Rio Grande River (Río Bravo).

Food lines – long and tedious; the bottom right image is a group of women from San Benito, TX giving out sandwiches to migrants. These donation groups are extremely helpful but their schedule visits are irregular. 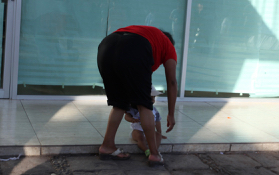 Children and adolescents create their own games and spaces to live at the INM camp. They lack games, toys, books, etc. It’s particularly hard on mothers with babies and toddlers; there are no chairs, benches, or tables.

Images of the Gateway International Bridge (above) and the surrounding areas.

In the Shadow of the Half Moon

Human Rights Abuses Among C.A. Migrants on the Rise

In the Shadow of the Half Moon: Stories of Central American Women in Search of a New Life

In the Shadow of the Half Moon: MAPS AND GRAPHS

Visit my blog. http://bilingualfrontera.blogspot.com Every Border Has a Similar Story Guatemala's Next Language Challenge Mexican Women in Contemporary Politics And more...

YELLOW PAPAYA https://yellowpapayasite.wordpress.com Yellow Papaya is dedicated to publishing articles that review literature - poetry, short stories, essays - written mostly by Chicanas. The Yellow Papaya style stems from my personal blog, and even though I maintain a scholarly voice throughout the content or material, the voice is personal and genuine. This is the first of a series of articles that addresses the works of the authors and artists of the two books.
Follow Bilingual Frontera on WordPress.com
Loading Comments...
Comment
×